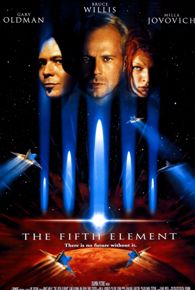 The film is about the extinction of the Earth, followed by the clumsy professor's explanations of the four elements - earth, wind, fire and water - and the fifth - life, which, when brought together in a certain place, create a force of energy capable of defeating the force of darkness, which, expected to threaten the world 300 years after Britain first declared war on Germany. Korben struggles to wake up in his chicken coop apartment, finds no food in the fridge, disappoints the cat, and climbs into his battered yellow taxi to hit the air lanes - 23rd century traffic jams are like 3D tic-tac-toe - only to get through the roof of his house fell through a perfect creature dressed in bandages. She speaks gibberish, has sunset-colored hair, and is overweight. This is the beginning of a dangerous mission. Somewhere in Meglo Towers, Zorg, a quirky rogue with a quirky Southern twang and a bad case of control mania, plots to steal the stones and welcome the Dark Power, and the priest, who understands the importance of the girl in Korben's cab and the significance of the five elements, seeks to stop him. Why is the blue tentacled diva so important to both of them? Hold your breath. Willis is so close to his Die Hard alter ego that he can squeeze humor out of a single twitch of an eyebrow. Holm is hilarious and acts with his usual conviction despite being surrounded by Star Wars extras. Oldman totally overacts and enjoys every brutal minute. Jovovich plays hard, beats up a gang of dogheads, flashes a dazzling smile, and you understand that she is perfect. The movie is funny and wonderful. He has a genuine eccentric conviction. Long live Besson!